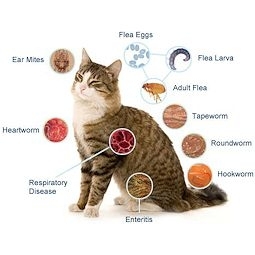 There was a time when parasites like fleas, ticks, and roundworms were considered mostly a nuisance. Now, however, we know that parasites can cause serious illness and even death in pets. For example, ticks can transmit infections like Lyme disease, and fleas can transmit tapeworms and Bartonella the bacteria that causes "cat-scratch fever" in humans. Another type of parasite, called a heartworm, is transmitted by mosquitoes. Heartworms live in your pet's lungs and heart, causing damage to these organs, and sometimes even death. Intestinal parasites, like roundworms and hookworms, also threaten pets and are even transmissible to humans.